You know how, sometimes you take those Myers-Briggs “tests,” and you result like 5 different personalities depending on which test you take? And then from there, there’s some generic information that may or may not pertain to you?

I didn’t think the MBTI was all that accurate for this reason, and I still take everything that’s stated with a grain of salt. I tended to bounce between INTJ, ISTJ, and INFJ––but primarily between INTJ and ISTJ. After years of random internet tests (one of which labeled me as an extrovert HAHAHAHAHAHA), I stumbled across The Book Addicts Guide to MBTI earlier this week, and things made a bit more sense as to why I seemed to share so many qualities with INFJ while… not being one. First off, let’s take a look at my results. 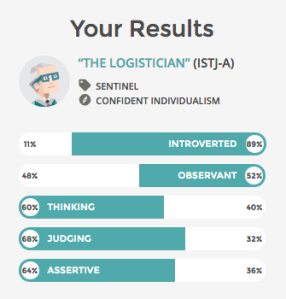 I took the test in 2016 on 16personalities. There’s a bit of debate on the reliability of this test (and all online ones), but personally, I found it fairly accurate and insightful. That year, I resulted ISTJ and, because they broke it down for me, solved the mystery as to why I was ISTJ or INTJ depending on the day. I’m pretty close to 50-50 between the N/S options. I read the descriptions (there’s a lot of information on this site), and I agreed with some but not all. The ISTJ is the duty-bound personality, and I think my culture has a lot to do with instilling this in me. We are very familial people, and we definitely feel duty-bound to our own blood. This, in turn, makes me duty-bound in all my responsibility to people I care about. It runs deep. The counselor I saw in university noted that I needed to learn to submit duty beneath love, or else it just doesn’t work well.

Two days ago, I took it again to see if I’d get something drastically different. That could definitely tell me how accurate or inaccurate this site is after all. This was my result. The I, T, and J still swing in the same direction, and the percentages changed a few digits but really not by much. And that N/S is still nearly 50-50. I also agree with my I getting into the 90s. I don’t think people exhausted me 2 years ago as much as they do now. Several people who are far more into this than I am have said that the Assertive/Turbulent can change pretty drastically pretty easily.

I read the overviews of the INTJ on the site, and this time I felt pretty good about those descriptors. “INTJs are simultaneously the most starry-eyed idealists and the bitterest of cynics.” Several people agree this is definitely me. The section on relationships pretty much zeroed in on why I’m single (and I’m pretty cool with that because better to be alone than with the wrong person… which I guess is an ISTJ reasoning trait?). With these results, I see why one of my top Strengthsfinder results is Deliberative. From the Gallup website:

“For you, life is not a popularity contest. Life is something of a minefield. Others can run through it recklessly if they so choose, but you take a different approach. You identify the dangers, weigh their relative impact, and then place your feet deliberately. You walk with care.”

I make decisions primarily based in logic, and I’ve very often regretted this. Every time I’ve convinced myself to logically choose the option that is not the option I actually want, I’ve backtracked months or years later to take the path I should’ve originally taken (despite having no logical backing for it). I don’t make gut decisions or decisions that aren’t properly thought out, which leads me to the aforementioned issue. These days, the closest I get is reminding myself that the logical decision isn’t automatically the right one, and I may have to backtrack and waste time, energy, and money to go the other route anyway. I think only INTJs can logically convince themselves to not think logically about their decisions. 😂 I found it amusing that there’s an extra section on this site for Emotions that’s unique to INTJs. None of the other personalities have this page because apparently, we’re the only ones who suck at emoting.

As it turns out, I emote slightly better than your average INTJ. This entry on The Book Addicts Guide to MBTI discusses how INTJs deal with trauma. If you’ve been around long enough to have followed my other blog, Above the Ashes, you probably know that I’m not a stranger to childhood trauma (If you haven’t, it’s not too late. I’ll still write there when I feel like exegeting a passage for fun). From abandonment issues to emotional and physical abuse from people I trusted, I’ve stepped through a few minefields in my life, and I started along those paths quite young. MBTI Fiction posits that when trauma is dealt with in a healthy way, the INTJ will develop and mature their Fi (introverted feeling) function and sometimes be miscategorized as an INFJ. It’s also fascinating to see the ways I could’ve gone had I not dealt well with my trauma. (Thanks, God!)

I do still have trouble emoting, however, which has become quite evident in my current work in progress. A friend of mine has been reading through everything I’ve completed so far and pointed out that my protagonist seems quite unfeeling. She and everyone from their city just experienced a traumatic, life-changing event, and she hasn’t even called her twin to check on him (well, she did, but he didn’t pick up, and she hasn’t tried again). She hasn’t called the woman who raised her. She hasn’t talked to her best friend. She’s just putting one foot in front of the other and trudging forward.

Now, part of this is my fault in the way I set the story up. I couldn’t find a place to introduce her among all the action happening in the opening scenes, and before I knew it, they were already in the next town, and no one has any idea who she is. But I know who she is! I know a lot of things about her! So of course I can track with what she’s doing and still know her to be an awesome and loving person.

But her lack of emoting will cause distance between her and anyone reading about her, even if they are logical like me.

I often don’t stop to think about how situations make me feel. My first instinct is to look for a solution or a way to get through them. I’m seeing this reflected in the sections I’ve written so far. She has been moving on from one situation (issue) to the next (solution/new issue) to the next (another solution/new issue). I’ve been looking at solutions for her problems and have been looking for ways to solve them rather than letting her consider them and solve them on her own. The pacing in my story has been quite fast. We haven’t slowed down for emotions at all. None of my characters have actually.

I now understand that pacing a novel properly does not come naturally. Well, it might for some. If that’s you, I’m happy for you, and don’t ever talk to me. (JK, you can talk to me. Just don’t ever bring this up. Ever.) I’ve just taken unsuspecting readers on a whirlwind rollercoaster, and we only barely left Kansas.

Man, if I thought emoting for myself was difficult, how much more difficult will it be to emote for other people? 😅 But it will let me really know them more, rather than know about them. I’ll know how they come to their decisions, not just the decisions they come to. It’s quite an intimate process, and I suspect this will help me to really love my characters and story more and more. 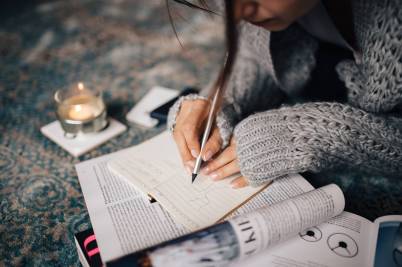 Now, I know what some of you are thinking. Knowing and accepting your MBTI could result in bias. You may try to embody and conform into who they’ve told you you are.

But I literally looked at this days ago, and I have done absolutely zero research in it. All that’s happened is: I retook the test, laughed at my result (becoming more introverted in my old age), then read the descriptors and nodded or shook my head along with them. I don’t plan to dig into it much more than this, except to maybe look at how different characters in different personality types would respond in different situations.

I’ve always bucked stereotypes, and this is no exception. You just gotta be you, and that’s all there is to it. If you’re not true to yourself, then you can’t write an honest story; and if you can’t write an honest story, you’re not writing your best story. Sure, it can still sell a ton and make you successful because your writing skills are fantastic and amazing (again, don’t talk to me if that’s you 😜), and that might even convince you that you’re doing things right at the end of the day. But somewhere, some time, if you decide to really look at yourself, you’ll see the truth. So be true to you, and don’t answer to anyone else.

2 thoughts on “i discovered a new writing obstacle”

red_converse and Writing by redconverse is licensed under a Creative Commons Attribution-NonCommercial-ShareAlike 4.0 International License.